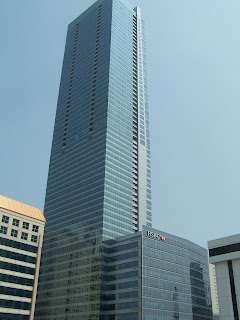 Casting a grand shadow over downtown Miami, Four Seasons Hotel & Tower measures 800 feet from base to tip. The 64 story building has a steel and concrete structure, a caisson foundation, and a blue curtain wall facade.  It was designed by Gary Edward Handel & Associates and Bermello Ajamill & Partners to sustain winds upwards of 100mph.

Also known as Millennium Tower, it opened in 2003 after three years of construction. At the time, it was the tallest US residential building south of New York. Four Seasons Hotel & Tower is located at 1441 Brickell Avenue.

In addition to the Four Seasons Hotel, the tower consists of condominiums and commercial office space. One of its three lobbies is adorned with an 80 foot waterfall.

Click here to see the list of the tallest building in each of the 50 United States.
Posted by Lincoln