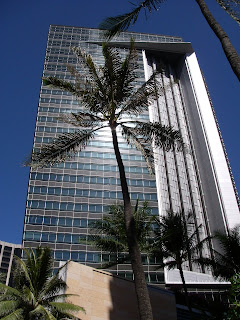 First Hawaiian Center stands 429 feet and 30 stories high. It is the corporate headquarters of Hawaii’s oldest and largest bank. It is located in Honolulu Hawaii. The postmodern skyscraper is unique in the way it and incorporates two separate styles of architecture on its opposite sides. The windows facing the ocean are horizontally louvered, and those facing the mountains are vertically proportioned, framing both views in their most flattering natural light. The building was designed by Kohn Pedersen Fox Associates and opened in 1996 after three years of construction.

First Hawaiian Center’s height is especially significant because, prior to its construction, the city of Honolulu did not allow any towers over 350 feet tall. The city council raised the limit to 400 feet for this tower, and then compromised even further, allowing the extra 29 feet to accommodate this particular design.