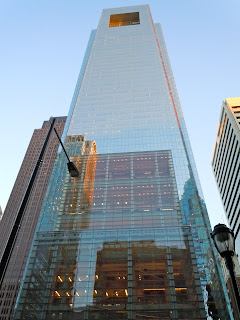 Standing 973.51 feet tall, Comcast Center, also known as One Pennsylvania Plaza, is the tallest building in Pennsylvania. The postmodern skyscraper is located at 1701 John F. Kennedy Boulevard in Philadelphia Pennsylvania. Its composite structure and glass façade were completed in 2008 after three years of construction. The 57 story tower cost approximately $540 million to build. It is used for commercial office space and connects to Suburban Station’s underground concourse. There are also shops, services branches, restaurants, and a TV studio inside.

Earlier plans called for the building to stand 746 feet tall and have a golden Kasota stone façade as a tribute to the Philadelphia Museum of Art. The height was increased and the façade changed to glass during the planning phase in 2004. Comcast Center was designed by architect Robert A. M. Stern for Liberty Property Trust.

Comcast Corporation is the world’s largest cable TV provider. They have a lease to the building until 2020 and use 89% of the office space for their corporate headquarters. Citizens Bank of Pennsylvania is the secondary tenant. The tower’s main lobby features the Comcast Experience: A 2000 square foot high-definition LED screen that projects views of Philadelphia’s historic sites and many other images for eighteen hours daily. The building is designed to be environmentally friendly, and is Leadership in energy and Environmental Design (LEED) certified.
Posted by Lincoln