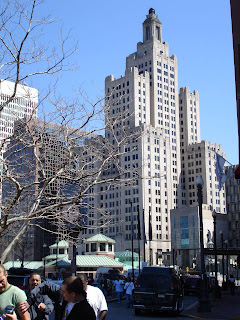 Constructed in 1927, Bank of America Building in Rhode Island is the oldest of the tallest building in each state. The Art Deco style skyscraper is made of steel and has a white brick façade. Its stepped massing is reminiscent of the New York skyscrapers of the 1920’s.

The building, originally known as the Industrial Trust Tower, consists of a central tower measuring 26 stories and 428 feet tall, and six wings. The top is adorned with a lantern.  Its main use is for commercial offices. Bank of America Building is located at 111 Westminster Street in Providence.
While the tower has seen few renovations over the years, it does have an updated lobby. Several stone eagles were removed from the top of the building many years ago after one of them fell and landed in the street below. The building’s peak is illuminated by night with blue lights.  The lights are changed to red and green for Christmas and to red for Valentine’s Day.

The main tenant Bank of America, moved out in early 2013 making it the first time since 1928 that a bank has not occupied the building. It is still unknown who will occupy the building but it is rumored it may turn into an apartment complex. As for now it sits vacant and dark until a new tenant moves in.

Bank of America Building can be seen in the background on the television show Family Guy.  It is also occasionally referred to as the Superman Building because it resembles the tower shown in the 1950’s Superman TV series as The Daily Planet. The building actually used to portray The Daily Planet was Los Angeles City Hall.

Click here to see the list of the tallest building in each of the 50 states.
Posted by Lincoln