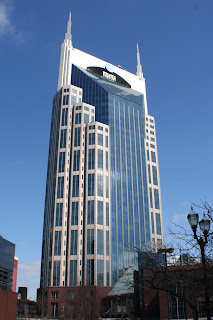 Nicknamed the ‘Batman Building’ for its dark façade and the positioning of its twin spires, Nashville’s AT&T Building stands 617 feet tall. Construction on the 33 story postmodern skyscraper began in 1991 and was completed in 1994. The main roof of the tower features a communications dish which is covered with a tri-star design. This was inspired by the volunteer symbol on the state flag of Tennessee.

The building is located at 333 Commerce Street on a 2.7 acre property. It is an office tower with the capacity to accommodate 2000 workers. The foyer contains a three story winter garden atrium.

The tower was designed for South Central Bell, which later became BellSouth Telecommunications, and finally AT&T. It was purchased by Prefco XIV for $100.8 million, and until 2006, the telephone company was the sole occupant of the building. Local TV station WTVF Channel 5 has two video cameras in the western spire that are used to provide views of Nashville to help cover news events. The AT&T Building was named one of the 12 most original office buildings in the world by the French online business journal Le Journal du Net.

Click here for the tallest building in each of the 50 states.
Posted by Lincoln