Renaissance Center in Detroit is the tallest building in Michigan and on March 1 2014 I ran the stairs of this building marking the 10th state I have completed on my quest to 50. March 1st marks almost a year since I started this crazy goal and I am now 20% done. It feels great to have a goal and see progress coming after a lot of hard work. I am getting faster and my body is getting stronger.

When I first booked the flight to Detroit I thought I was being so smart by booking the redeye that arrived at 6:35 am Sunday morning so I didn’t have to pay for a hotel. A few weeks later I realized I was not so smart…the redeye I took got me in 6:35 am on Saturday morning…not Sunday morning. For weeks I wondered what I could do that Saturday. On Tuesday of this week I received a call from my mother in law asking if I was ever going to be in Cleveland, and if I needed to go there to climb a building she would pay for it if I could clean out and ship the contents of my sister in law’s storage unit. Amazing how things work out!

Friday evening at 1:10 am I sat in my first class Delta seat and slept for one hour of the 3-hour flight to Detroit. Landed at 6:35 am and drove for 2 hours 30 minutes to Cleveland. I pulled over twice due to fatigue, I was so tired and the long flat boring roads didn’t help. After arriving in Cleveland I took multiple loads of stuff to dumpsters and to FedEx to box up and ship to Denver. It was an 8-hour day of cleaning a storage unit that is actually quite small. Once finished, I made the long drive back to Detroit in a snowstorm. The city of Detroit had an inch of slippery snow covering the roads when I arrived. Due to the city being in bankruptcy they don’t send plows out to clean off the snow or tow abandoned cars. By the next day the snow was still on the road and there were many abandoned cars on the side of the road. 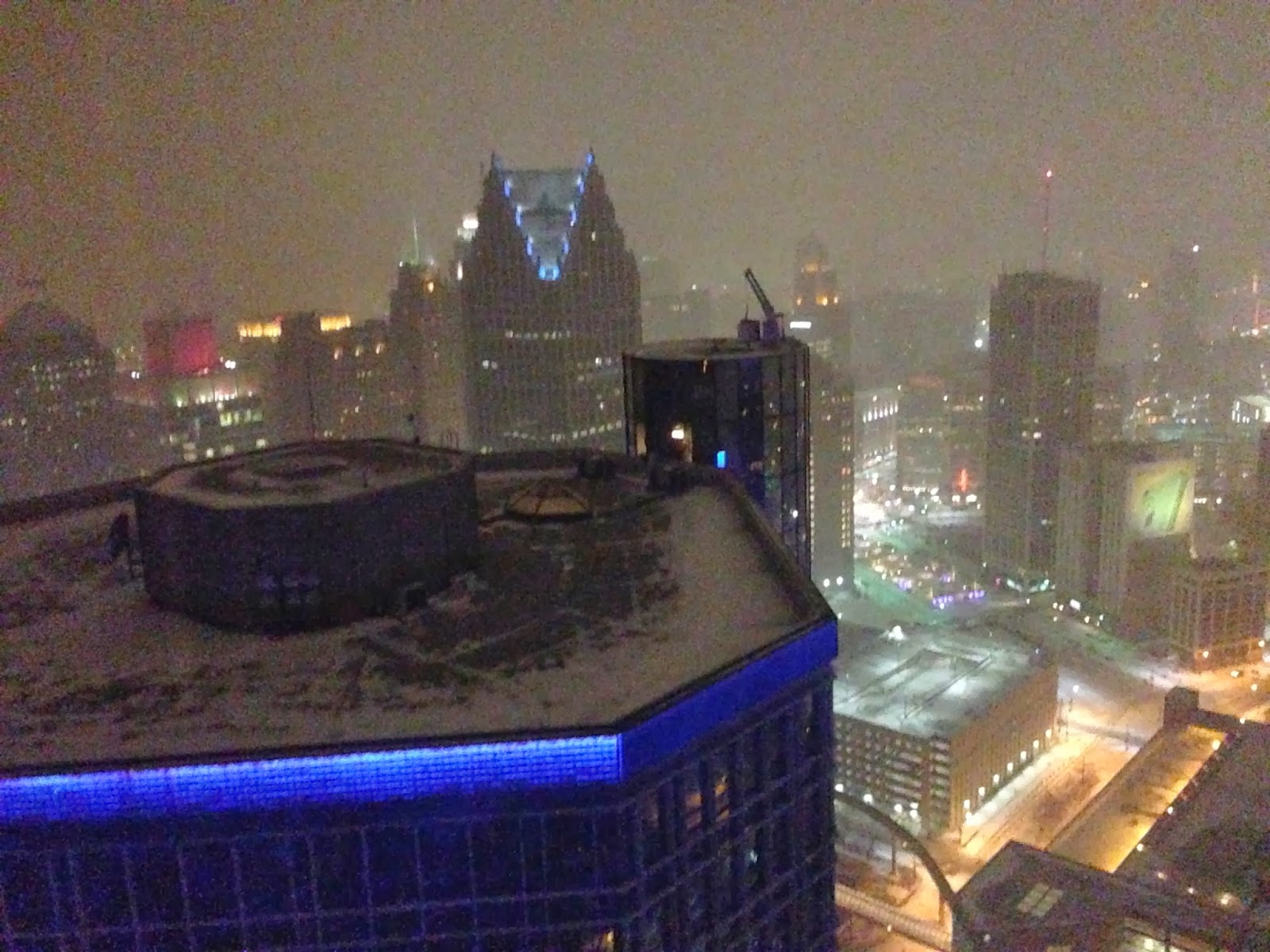 I finally checked in the hotel with a sore back, a foggy mind but enjoyed the beautiful view out of the 58th floor windows. I hit the bed at 8:15 pm and didn’t move until my alarm was blaring at 8:15 am. Although I had slept for 12 hours I was completely exhausted. I couldn’t believe I was going to take my body to the top of a 72 story building in an hour.  I opened the drapes and along with the rush of cold air I noticed my window was covered in frost. It was quite strange but a very neat sight. 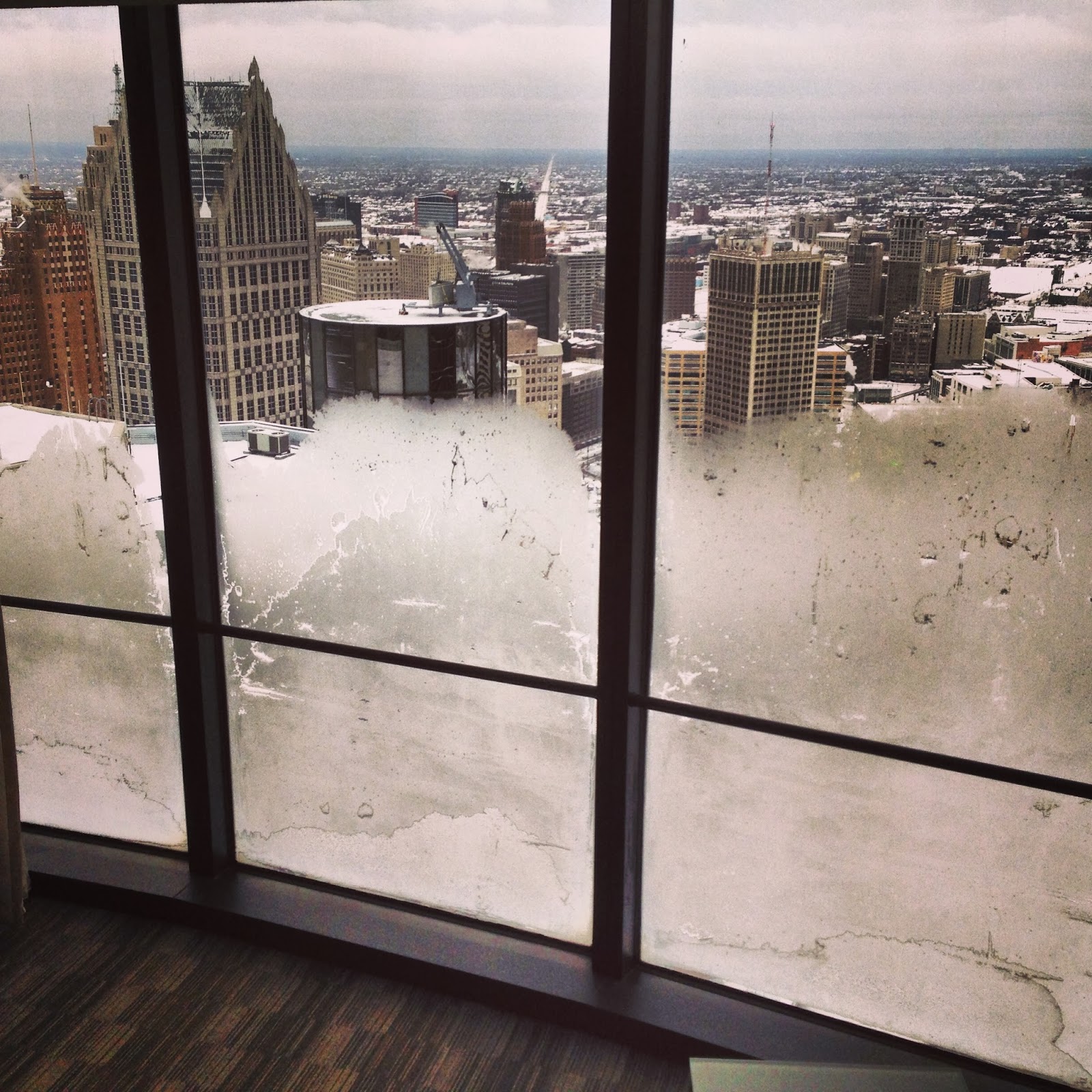 I found the check in room in a large lobby area with windows overlooking the cold Detroit River with Canada on the other side. With the amazing views, DJ playing music and the general excitement among climbers it was a great atmosphere.

The first group they let start were the “Elite” climbers. In order to be in this group you had to submit times of other races to qualify. There weren’t many elites and it took 5 minutes for them all to be in the stairwell running. My start time wasn’t for another 55 minutes and it was with the regular group of people. I did not want to have the same crowded stairwell that I experienced in Denver the previous week. I tried to have them let me in with the elites or early but it wasn’t happening.

Finally at 10:00 am they let a large group of 300 runners line up. I had positioned myself well and was the 3rd person in line at that point. The start line had a strange foil type path leading to the stairs with a volunteer typing in runner’s numbers in to a little calculator type thing. They warned us not to get too close otherwise our timer might inadvertently start….strange set up.

After the first two people started I was off. I ran through the strange starting tunnel and jumped up to skip my first step. Only problem was these steps are all-concrete, not very tall and are very slippery. I fell onto my hands and knees immediately and laughed as I got up. One step up and I’m already on the ground….not a great start.

The stairwell was unique where most stairwells you run up a few steps, make a turn and run up another set of steps and you are on the next level. For this building they had longer sets of stairs so each time you hit a platform you are on the next floor. This was great. It is easy to lose time while turning on platforms so I could just run fast and make the turn to the next floor.

I passed the other two people while on the third floor and was all alone the rest of the run. It was fun to hear the volunteers talk to me and say “You are the first one!” “Great job keep going”. There was one guy on the 32nd floor that said in a kind of grumpy voice “you have a reeeaaaallllyy long way to go….slow down.” I had to laugh to myself, not the most encouraging things to say to someone in a race.

I was able to skip a step the whole way up and felt pretty good when I hit the top floor. The view from the top was incredible with the snow-capped city of Detroit, a large river and a great view into Canada. This is one impressive building and location that my engineering and architect family members would appreciate.

The medals area was down on the 4th floor so I had to make my way back down the elevator then into a large room with snacks and vendors. The best part was a bunch of nice ladies and a couple of guys with pompoms were cheering for everyone as each group exited the elevator and entered the room. Yes it did make me smile but I appreciated how generous these volunteers were to spend most of their Sunday morning cheering on random people.

A couple of hours later I was able to see the final results and I did the best I have ever done in a long race.  I ran the Renaissance Center in 9 minutes 34 seconds placing me 47th out of 852 racers that completed the race. Considering this building is 72 floors tall and the Denver race the prior week was 56 floors and it took me 11 minutes 11 seconds.

What a great experience. I am really enjoying the journey of accomplishing this goal and look forward to my future climbs. Washington in a couple weeks will be my next race and I am going to be ready! 10 down 40 more states to go!!